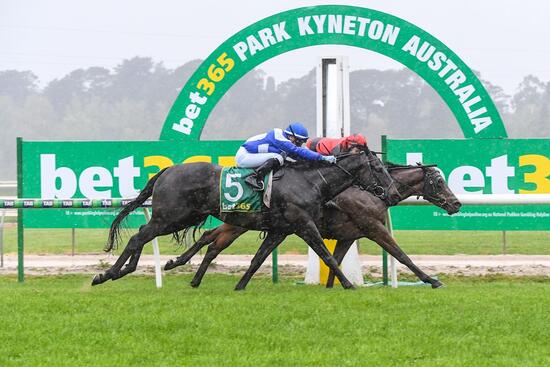 In atrocious conditions the in form Indiana Lilly made it three in a row in the Kyneton Cup ($125,000 race) on Wednesday 3rd November to secure her seventh career win and taking her prizemoney to well over $300,000. Craig "Froggy" Newitt despite going through two pair of goggles and losing visibility several times during the run was able to get up on the fence in the straight for a gutsy win by both horse and rider.

Congratulations to all her very excited owners on winning a Country Cup especially during Melbourne Cup week with the seven year old mare who is in the best form of her career. Shea is now going to look to the BM84 2500 on Cranbourne Cup Day on Saturday 13th November.

A big well done to Shea, Jamie and all the hard working staff at Eden Racing for a great week with a strong 4th by Housay on Cup Day at Flemington, Indiana Lilly's win in the Kyneton Cup, Rock In The Park 3rd at 50/1 on Oaks Day at Flemington beaten a neck, then at Pakenham on Friday night Calmsir 5th, Reflecting Image 3rd and Red Red Wine 4th all ran good races.

On the last day of the Melbourne Cup Carnival we had Dangers who finished down the track in the 3YO 1400 and it was a much better run than its finishing position being 5 wide the journey and still boxing on at the turn before the hard run found him out but the stable were pleased with his effort. Arguably the run of the week for the stable was by Schwoon in the last race of the Carnival at only his third race start and down the straight for the first time finishing a close up 6th in a field of 16 in the BM80 1100 against many seasoned horses and only being beaten just over 2 lengths.

The stable is going particularly well and there is no better time to get involved with some terrific opportuntities available at the moment.