Lilly back in winners stall 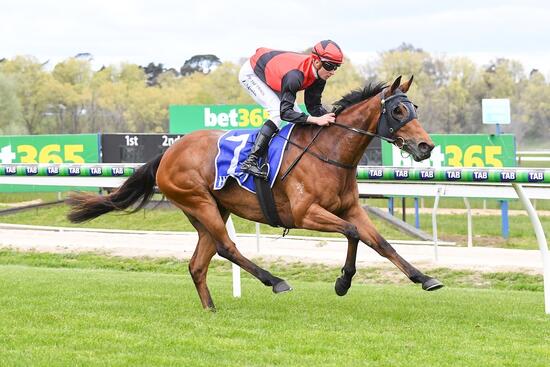 It was great to see the 7 year old Teofilo x Live And Learn mare back to her best at Kyneton on Tuesday with a very impressive win in the BM64 1880. The clear plans for Zac Spain pre race (to race on pace) went out the window when the mare missed the kick and was relegated to the rear. Passing the 800 Zac was able to build momentum inside horses and in the straight was able to maintain her run to win emphatically on the line taking her record to 5 wins from 35 starts including 11 placings for $224,000 in prizemoney.

Congratulations to all owners for their patience in allowing Shea to find the right race and the stable are now confident that now she has hit form she can string a couple more together particularly if we can find the sting out of the track. Well done to Shea, Jamie and the hard working team at Eden Racing for the way the mare was presented at Kyneton.

It is worth mentioning that the stable has the half sister to Indiana Lilly in work at Cranbourne  - a 3 year old filly by Kuroshio out of Live And Learn (Zabeel mare). Shea has a very high opinion of this filly who was impressive in her jump out back in June before heading for a three month spell. Kuroshio's progeny are going particularly well Australia wide including Savatoxl who has won 18 from 29 starts with a Group 1, Group 2 and Group 3 to his name including the Schillarchi at Caulfield on October 9th.

There are limited opportunities still avaialble in this promising filly who is expected to get to the races this prep.