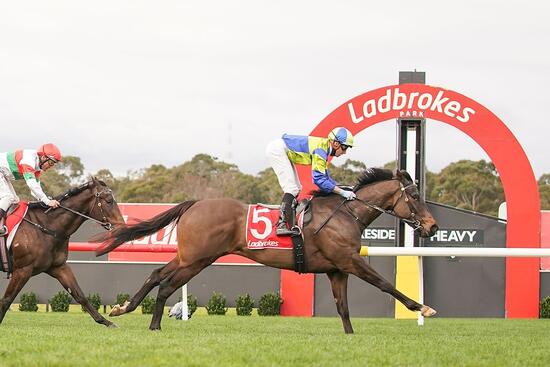 The ex New Zealander Rock In The Park certainly rocked Sandown yesterday including punters when he was a super impressive winner at 40/1. The 4 year old gelding by Roc De Cambes out of Merle Park was having his third start for the stable and yesterday he was first up this campaign. Brilliantly ridden by Daniel  Moor from the outside gate on the heavy 9 track with 61.5kg the horse was presented from last as they straightened and quickly reeled the leaders in to win very comfortably eased down to win by 1.25 lengths.

Whilst the horse was showing he was on track for a great campaign Shea felt that he may need the run yesterday and would benefit from the run. His class proved him to be far too good and he will no doubt take plenty of benefit from the run as we look forward to a good couple of months ahead.

Congratulations to our fantastic group of Geelong owners Craig Scott, Tim Darcy, Brendan Hovey, John Nagle and their partners and Dr Genevieve Seabrook and Dr Michael Shembrey. This is the owners 4th winner in the last three and a half months with the stable.

Congratulations to Shea, Jamie and all the hard working and dedicated team at Eden Racing.

Rock In The Park's win was Shea's 32nd for the season (and 253 career winners) with him having a strike rate of just under 16% or 1 winner from every 6 runners and a place strike rate of 38%. For those who follow Shea and Eden Racing the profit on investment this season is a very healthy 45%.

We are receiving a lot of enquiries from prospective owners at the moment looking to get on the Eden bandwagon and there are still some quality opportunities available in well bred young horses.