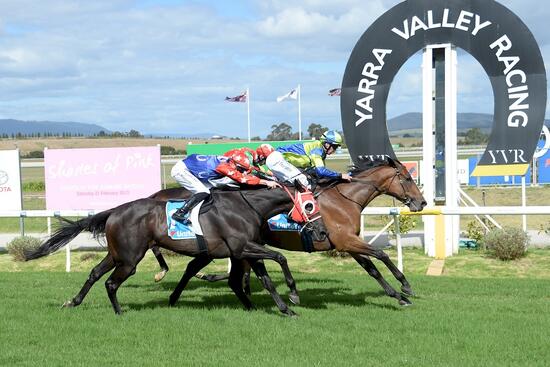 It was a great day on Sunday at Yarra Valley for our dedicated foreman Jamie Dentith who owns Frag the winner of the BM 64 1500. Coming from last before the turn in a pretty handy field it was another gem of a ride by Damien Thornton finding the split inside the last 100 to win impressively. Jamie races the 4 YO Shrapnel x Lady Branax gelding with his Queensland colleagues Carl Dahl and Mrs K Jackson. Congratulations to all concerned including hard working Rodney Linklater and the Eden Racing staff.

After his first up run at Moonee Valley two weeks ago over the shorter unsuitable distance of 1200 Frag took great benefit from the run and his work since has been good. He has now won two from nine starts with the best yet to come as he gets out a little further in distance and he can strike rain effected tracks.

The win takes Shea Eden to 23 winners for the season at just over 19% strike rate the second best in the state behind Phillip Stokes who is having a great season. For the past 12 months Shea has trained 32 winners and 48 placings from just over 200 runners.

Again it's a great time to race a horse with Shea and Eden Racing with the combination of his great Cranbourne set up along with his beach facility near his property at Corinella.