Much deserved city win by Housay 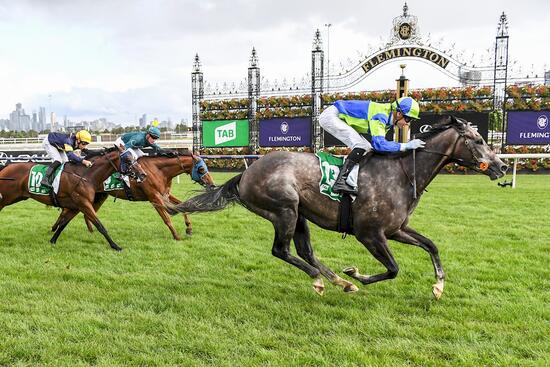 Following two extremely luckless city runs the exciting Zebedee x Taransay gelding Housay broke back into the winners circle on Saturday in emphatic fashion at Flemington in the BM84 1200 down the straight for the first time. It was a superb ride by Jye McNeil placing the horse with cover in the run and then getting him to the outside at the 250 for a runaway win against very competitive opposition.

He was again presented in magnificent order in the mounting yard given that he is still in his first preparation which is a credit to Shea ,Jamie and all the team. He now boasts a record of 7 starts for 3 wins and 3 placings and with an ounce of luck he could have easily won at least one or two more in his first campaign. Congratulations to owners Ray Collins, Paddy Quinn, Jon Gerschwitz and Shea on the great win and for their recent patience.

The win takes Shea Eden to 19 winners for the season with 5 in town and with a 19% strike rate is still second in the state behind Phillip Stokes on 22.5%.

Well done to all the Eden team for Saturday's success at headquarters.