Patience pays off for Hero 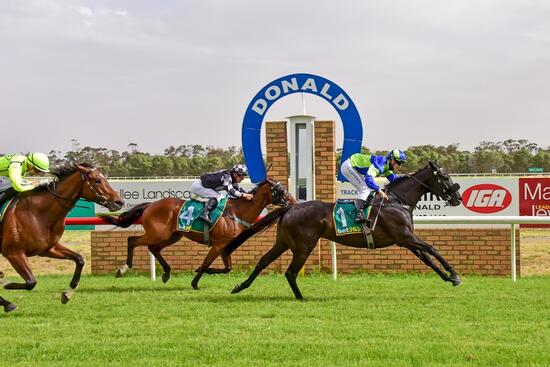 It's taken a number of runs to work out the ex WA galloper Creative Hero and the patience and belief paid off for Shea and the owners when the 5YO More Than Ready gelding won impressively at Donald on Sunday in the BM 64 2000. Whilst not a pretty ride it was a most effective ride by Laura Lafferty who followed instructions to a tee presenting the horse at the top of the straight where he showed a great turn of foot and through the line showed that he may even get further. This dry tracker is relatively lightly raced and was previously bred and raced by Bob Peters in Perth where he boasted a win over top level horse Regal Power. Yesterday was his 4th victory from 15 starts with prizemoney now at $150,000.

It has taken a couple of months by Shea and the staff to restore confidence in the horse and that was clearly on show yesterday.

Congratulations to our very loyal Geelong based owners who purchased this fellow back in March from WA.

The win (17th for the season) has Shea remaining as the highest winning percentage by a trainer in the State with 23.6% winners to runners and just under 50% top three placegetters to runners.

With all horses running well there's no better time to get involved with the Eden stable as the key stats would indicate.