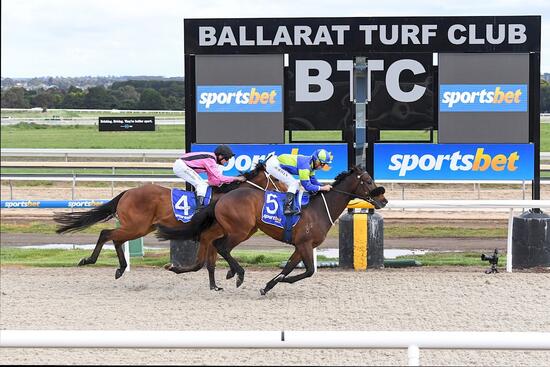 It was pleasing to see the Denman x Saint Angers gelding return to winners list yesterday at Ballarat in the BM58 1200 albeit on the synthetic surface which saw the field reduced to only three runners. Depsite the small field the market still thought the favourite Credible Witness would have our measure starting well into the red and our horse getting out to $2.50 in some quarters pre race. Although missing the kick a good half length Liam Riordan positioned the horse just off the favourite who had a very soft run in front. When the whips were cracking in the straight French Bishop proved too strong in the run home. Shea believed the removal of the blinkers paid dividends and commented he may have considered taking them off a couple of runs back.

The win is Shea's 14th winner of the season and has him currently 7th on the Victorian Trainers Premiership. He also enjoys the best winning strike rate of all trainers with 28% to runners. The 50 starters he has taken to the races this season are averaging $10,000 a horse in prizemoney with prizemoney earnt to date over half a million dollars.

Congrats to everyone with French Bishop's victory and again well done to all the staff at Eden Racing. Success is a team effort.