Great Day at Ballarat with a double 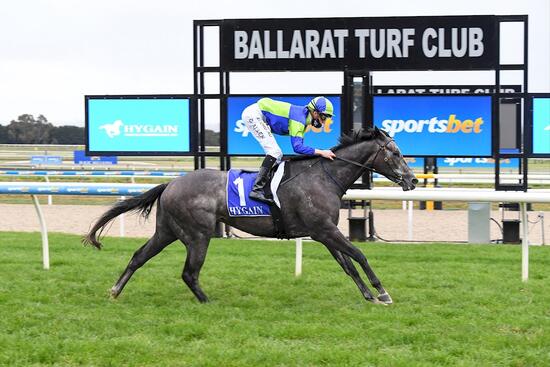 We headed to Ballarat on Wednesday with two runners and came home with an impressive double.

HOUSAY (pictured) backed up his super first start win with another top performance in the Class1 1200 beating a couple of handy horses. Carrying 62kg on a soft 7 / heavy 8 track and drawing the inside which wasn't the place to be on the day Ben Allen showed terrific initiative in taking the 4YO Zebedee x Taransay gelding straight to the front thus removing bad luck from the equation. Whilst he was there for the taking at the 200 when challenged he dug in, pinned his ears back and won running away on the line. There were two earlier 1200m races on the program when the going was arguably better and he went almost a second and a half quicker than one and not far short of a second quicker in the other  - both those winners were heavily backed young horses and won easily.

The second leg of the stable double was in the last race on the Heavy 8 when proven performer POLANCO saluted at his third up run with the inform young apprentice Madison Lloyd on board having her first ride for the stable. She was very positive from the gate and raced outside the leader until straightening where she went to the front and despite having many challenges in the last 200 Madison pushed the horse out for a very strong win. Polanco is now on track for another good campaign with the Melb Cup week Country Race on Oaks Day his aim. He ran a terrific 5th in the same race last year.

Congratulations to Ben Allen, Madison Lloyd, the owners of both horses and again a big effort by Shea, Jamie and the hard working Eden team.