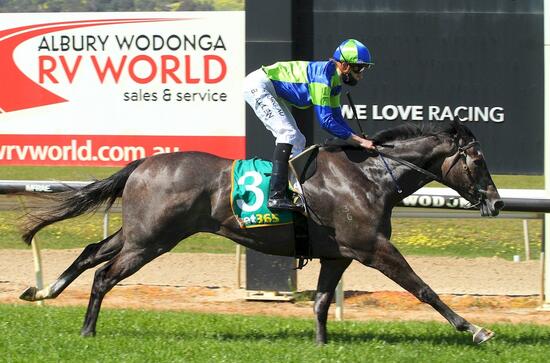 Shea unearthed another very smart horse today when Housay thrashed his rivals at his first race start at Wodonga in the 1100 Maiden winning by 7 lengths. Ridden perfectly to instructions by Ben Allen the 4 year old gelding by Zebedee out of Taransay ran 2 seconds quicker than the other 1100 Maiden and half a second quicker than the BM64 1100 later in the day.His time was less than a second outside the track record.

Pre race Shea caught the attention of the Racing.com viewers and hosts Terry Bailey and Matt Welsh when he effectively declared Housay just prior to the event. The entertaining  pre race and post race interviews received a massive amount of coverage on social media throughout the afternoon which is a real positive for the stable.

Todays win takes the stable to 10 wins for the season and we are only half way through September. The stable are looking to continue the run at Bendigo tomorrow (city class meeting) with the very promising Tadashi Hamada in the Class 1 1400 and Polanco in Race 6 and ex WA horse Creative Hero in Race 3 with the latter two horses not drawn that well and both will be likely to need one more run to top them off but having said that we do expect them to acquit themselves well.