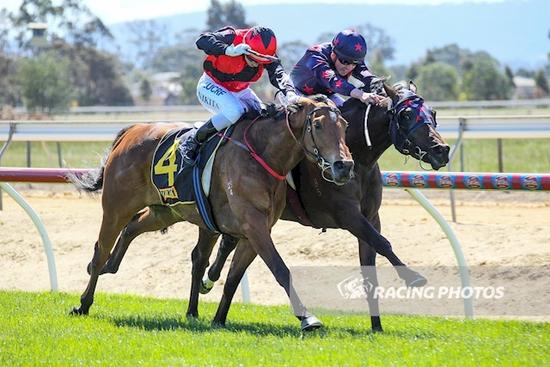 Indiana Lilly has broken her maiden at start four with a tough win under the guidance of Nikita Beriman. Nikita made the winning move to push forward as the field entered the straight and found herself in a dual over the last 200m. When faced with the battle, Lilly pinned back her ears and extended her neck to cross the line first in a photo decision.

The Teofilo mare had previously ran second at all three of her race starts and was knocking on the door for her breakthrough victory. She has gained the reputation in the stable of a mare who always tries her hardest and that was reflected in her winning performance.

"Some decent form had come out of her first few runs and it was just nice to see her knock her maiden over. She always give her best and deserves the win. Hopefully she can take some confidence from the victory and go on with the job," Shea said.

The victory meant a little more to the team as she was a home bred on Shea's Corinella property. Indiana Lilly's dam Live And Learn is by Encosta De Lago, which puts Indiana Lilly on the same breeding cross as Happy Clapper. Live and Learn has a Stryker filly on the ground and is a lovely type. She is also due to drop a foal by Kuroshio any day now.

She will now make the progression to a fillies and mares bm 64 over 1600m at Pakenham Friday.

Congratulations to all of Lilly's owners, hopefully the first of many wins.