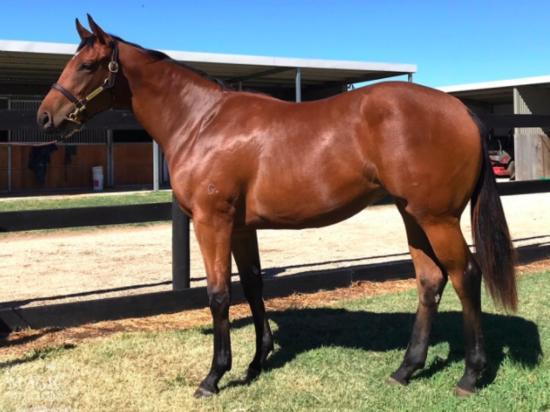 When purchasing progeny of a Sire that has yet to have a lot of Australian runners there is a great deal of risk involved. In the case of young sire  Dawn Approach, it looks as though the risk has paid off.

This strong, precocious and well related filly by prosperous young sire Dawn Approach possesses some notable points on her pedigree which have updated since her purchase. Adding to the impressive strike rate of her dam, her half-sister Sizzling Ace reached Group 1 level in her first preparation after being placed in a Group 2 and running 4th in a Listed Race on debut.

The hulking filly is bred on the same cross as exciting spring prospect Approach Discreet. The 3 year old colt is gaining quite the reputation after winning 2 of his first 4 starts, including a dominant 8.5 Length win. Such is the confidence in the cross, at the 2018 Magic Millions sale Godolphin paid $450,000 for his full brother. Exceed and Excel broodmares are fast becoming highly sought after, with his daughters producing multiple Group 1 winners Astern, Alizee and Bounding who was sold for $1.9 million at the 2016 Magic Millions Broodmare Sale.

He is also imposing an impressive record in the northern hemisphere with 34 individual winners, which include 3 Listed Race winners, 1 Group 3 winner and 8 Group and Listed placings.

The filly has recently returned to the stables to kick off her third preparation and is displaying the attributes of a smart young horse. Her track work riders consistently report that she carries her size well and is a balanced galloper.

She is fast stamping herself as a contender for the early two year old races and Shea will be giving her every chance to get there.

Follow the link below to watch her latest update.

The next highlight of our two-year-old features will be our exciting group by up and coming stallion Zebedee.