A Jewel to behold 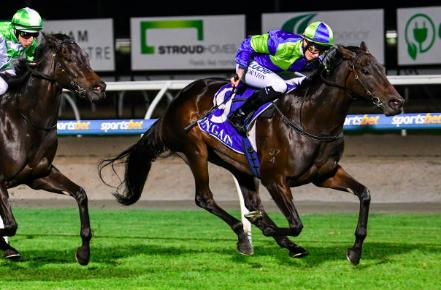 Exciting filly Moana Jewel got her maiden out of the way with minimum fuss at only the second time of asking when she scored in the Superior Food Services Maiden (1200m) at Pakenham on Thursday.

By New Zealand based stallion Ocean Park, Moana Jewel was a Karaka Ready To Run purchase in December 2016 and has shown a great deal of talent since entering our program.

"She's not big but she's got a great attitude and a really good motor. She wasn't 100% fit tonight and she did a really good job given she was exposed so far from home. I think she's the sort of filly that could progress very quickly this preparation and hopefully end up in a good race."

Ridden perfectly by apprentice jockey Stephanie Thornton, Moana Jewel was heavily supported by punters on Thursday and never gave her backers cause for concern. Sitting outside the leader for much of the race, Moana Jewel quickened clear of her rivals with ease by the 400m and maintained the effort to win by 3/4 of a length.

"I started going over to New Zealand for the Ready To Run sale a couple of years ago with the purpose of bringing back horses like this filly - sharp, intelligent, good moving young horses that would benefit from my training program and a little patience. Moana Jewel is probably the most forward of those we have bought but there are some other very nice horses coming through that will make their mark soon,"said Shea.

Moana Jewel's win was accompanied by a very positive run from Alsvin, who was unlucky not to claim the seventh race on the card.

"He's a serious horse and with a clear run from the 400m he would have gone close,"said Shea.

"We were a victim of circumstances tonight but I doubt it will take him long to make amends. He's definitely worth following."

“It was fantastic to see so many owners able to get to Pakenham to cheer on their runners and in particular a number of our passionate owners from Sydney and Newcastle who made the special trip down and back in the one day to see Moana Jewel salute.”