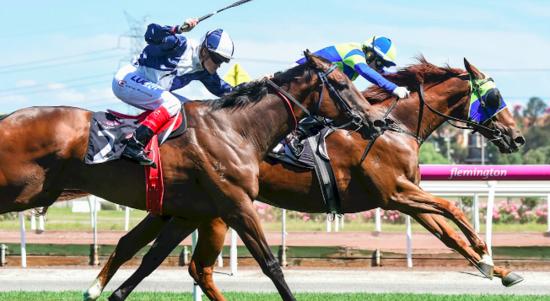 Shea's confidence in emerging three-year-old CAVALERO (3yo g Helmet x Zipstream) was justified at Flemington on New Year's Day and now the talented galloper has earned a crack at the Listed Tasmanian Derby in February.

Expertly ridden by Nikita Beriman, Cavalero enjoyed a perfect run behind the leaders before accelerating at the 350m to run into the race and then fight off late challengers.

"Sometimes these big dumb horses just need that extra time, we've given it to him and now what we're seeing is the tip of his talent. There's more to come from him and we'll try and win a Derby with him now."

Cavalero showed so much talent as a young horse that Shea was buoyed to spend more than $200,000 to secure his younger half-brother by Magnus at the 2017 Melbourne Premier Sale.

That confidence was rewarded two-fold at Flemington.

"Cavalero is starting to reward that now and his brother is showing me plenty of talent at home - it's a good family to get into and (breeder) Rob Crabtree is one of the smartest breeders going around. It's a pleasure to train a couple of young horses like this from one of his best families."