Alsvin gets the win 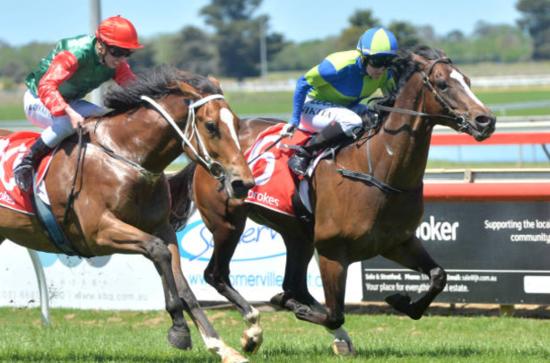 Debutant ALSVIN (3yo g Excelebration x Gialisa) made a winning debut and justified the support of a very happy group of owners when he snared the 1100m Subway Sale Maiden Plate on Sunday.

The 3yo had come along steadily in two preparations for Shea since being plucked from the paddock at Cornerstone Stud in South Australia. A big group of owners decided to punt on a winning day and caused a mini-plunge on course, surviving a strong finishing rival to see their horse salute.

"Yeah I think a few of them thought they might as well have a bet, thankfully they got the reward," Shea said.

"We got the horse because of a good relationship with Sam Hayes and Cornerstone Stud. Sam and his team do a fantastic job and we always have a look at their draft each sale. We bought a lovely Dalakhani filly from them at Melbourne."

"Sam told me he had this horse in the paddock and that he was a bit of a slow maturer but a nice horse. I think in the long run we all will be rewarded by a very nice horse in the making."

While indicating that he had talent, Alsvin has given Shea the impression that he would be at his best between 1400m - 1600m. A brush with a fence and a little cold in recent weeks had Shea in two minds about whether the horse would produce his best on debut.

"Sometimes they promise big things on the training track and don't deliver. This horse has been a work in progress, he's done everything right without ever blowing us away but he's obviously a good, straightforward racehorse," Shea said.

Ridden by Nikita Beriman, who continues to build a successful relationship with the stable, Alsvin scored by a neck and will now have a few days to recover before returning to the races for his next assignment.