You won't believe this story! 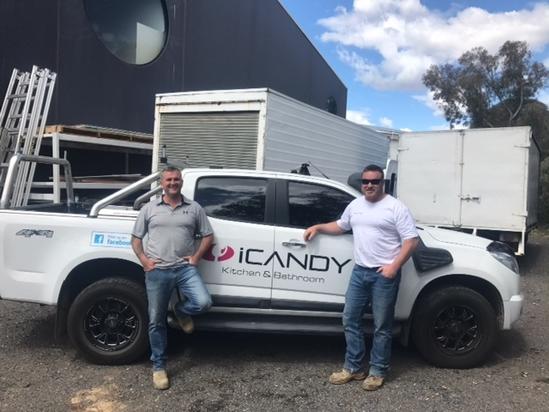 On Friday night at The Valley I'll take a new horse to the races and I doubt you would have heard a backstory like his.

To understand how this former star South African 2yo came to be in my stable, I have to first introduce you to Canberra cabinet makers Alex and Daniel - better known as iCandy Kitchens.

The boys love racing, and when they're not building kitchens they are dreaming of winning big races. A few years ago the boys decided to buy a little hobby farm and after looking at their empty paddocks for a few weeks they decided they might as well buy a mare or two and turn their weekender into a little broodmare farm.

They did the maths on stallion service fees and what they would cost each year and decided it made more sense to buy their own stallion - how hard could it be to breed your own horses? They were about to find out.

They searched the bloodstock sales websites and found a broken down 6yo stallion called King's Bay owned by China Horse Club up for sale in Adelaide. He had South African form but had been retired with a major tendon injury suffered in Singapore. China Horse Club wanted $10,000, Alex and Daniel offered $1000 and the horse was theirs.

They quickly borrowed a float, hooked it up to the ute and drove from Canberra to Adelaide in weather that in hindsight was probably ominous "It was sleet and and snow, absolutely the worst weather I've driven in. All the kids wanted to do was stop and build a bloody snowman - maybe I should have listened," Daniel told me.

Eventually they made it back to the farm. The boys took King's Bay from the float, cracked open a stubby, and decided there was no time like the present to start their breeding empire. They opened the paddock gate, let King's Bay loose and watched the frisky young bull charge towards their mare.

But things didn't go according to plan - apparently free-range breeding isn't the way to go.

"She saw him coming, lined him up and kicked the shit out of him," Daniel said.

"She absolutely floored him, we thought he was dead."

The lads reckon they just stood there shouting at each other in panicked shock - neither is a horseman (as you might have worked out by now!) and neither had any idea what to do next. Eventually King's Bay staggered to his feet with a haematoma the size of a basketball on his chest but looking worse for wear.

"I thought shit, we've killed this poor bastard his chest is going to explode - we called the vet who eventually gave him the all clear but he couldn't believe what we had tried to do, he must have wondered what the hell he'd struck."

The shock of what they had seen brought an end to their home-bred dreams and they immediately had King's Bay gelded to avoid any other romantic mishaps - which is where I come in.

A couple of months later the boys were sitting on the deck having a beer, watching King's Bay rip around the paddock - he looked pretty quick, maybe he still had what it took to race? I took a phone call from them that day - they said they had a broken down 6yo gelding from South Africa that they wanted to put back into work. He hadn't raced since 2013. I nearly drove off the road.

To say that the horse was out of racing fitness is an understatement, it took my wife Miranda the best part of 6-weeks to get him into good enough condition to put into work. But since then the horse has thrived, he's ticked all the boxes for me ahead of his debut for my stable - I'll always have one eye on his tendon but so far so good.

So there it is. From South African star to an injured cast off and a failed stallion that survived a brush with death. King's Bay has certainly lived an interesting life, let's hope he still has some life left on the race track.

Definitely the craziest come back story I've ever heard - I hope he can run!