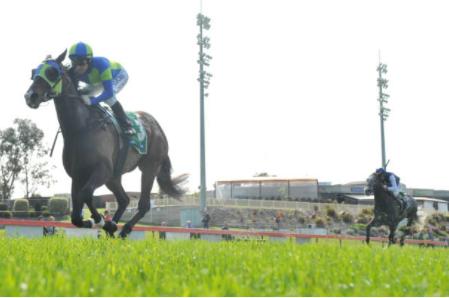 Confidence is everything in racing and as far as STRONG HAND (6yo g Not A Single Doubt x Three Diamonds) is concerned, confidence equates to dominant victories on the track.

Shea and the team watched on in awe of another wide-margin performance from Strong Hand at Cranbourne on Wednesday as the ex-Darren Weir trained miler smashed his rivals in the NP Distribution BM70 Hcp (1600m) to win by a widening 4.25-lengths, his second win in a row for our stable.

"It's remarkable how this horse has turned the corner, he really has his tail up now," Shea said.

"I am starting to sound like a broken record but Nikita gave the horse a perfect ride, he really exploded at the 300m when she asked him to go on and win the race."

Owned by the Mustica family, Strong Hand was sent to join our team after enduring a two-year winless run, the prospect of turning the horse around from champion trainer Darren Weir was a daunting one.

"It's very hard to improve them off Weiry, I think I've bought him back to his very best, the horse is very happy at the moment," Shea said.

"I told the boys to be patient and let me do my thing and if the horse wanted to play then we'd have some fun. I don't think he's ever been as dominant as he has been in his last two wins."

Strong Hand will now be given the opportunity to continue his form in better grade with a hat-trick of wins potentially on the horison.