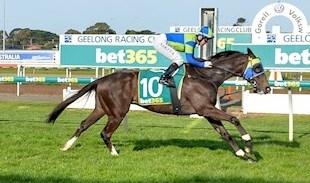 It's been a long time in the making - over 1100 days in fact - but KING WAY (6yo g Thewayyouare x Artistry) landed his second career win and his first win in Australia at Geelong on Sunday in the 2447m Prestige Jayco BM70 Hcp.

"It's a long way from France to Geelong and it's bee a long time between drinks - this is without doubt one of the most satisfying wins of my entire career," said Shea post race.

"I wrote a blog on my website a few weeks ago about what this horse has been through, what my whole team has been through with him, it means so much to all of us that he's won today and I think it's just the beginning."

King Way was having his fifth run of his current preparation at Geelong, with Shea confidently declaring to the horse's owners that the handsome stayer was "spot on and ready to win."

The assessment proved to be on the money, with King Way and jockey Nikita Beriman taking over the running at the 350m, before careering away to a 3.5-length win at the post.

"He's been knocking on the door and he deserved the win today, the horse means a lot to Shea and the team," said Nikita.

Next up for King Way are races at Mornington or Moonee Valley before a possible tilt at a country cup, but for now, all at Eden Racing as well as the horse's owners will revel in a special win.