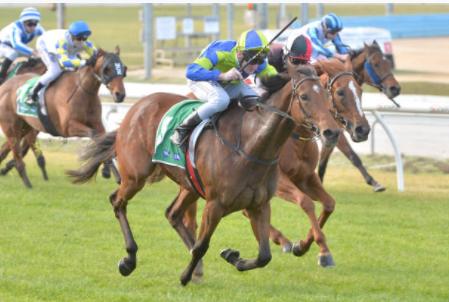 The hottest trainer - jockey combination in Victoria struck again at Cranbourne on Thursday when MY GYPSY JANE (5yo m, Teofilo x Manang) stormed to victory under Brad Rawiller.

Brad has a 33% winning strike rate with Eden Racing this season, a career strike rate of 21% with our team, and three of his last six rides for Eden racing have been winners.

Punters love the combination too - the Eden / Rawiller combo is running at a 53.1% profit on turnover.

"Brad is a top class jockey and we're stoked to be able to get him on when he's not riding for Darren Weir, " said Shea.

"All of the jockeys that ride for me do a great job, Jason Benbow, Brandon Stockdale, Ben Allen, and getting Brad is like the cherry on top. We've had a very successful relationship over the years."

A noted slow beginner, My Gypsy Jane jumped with the field on Thursday, thanks to some dedicated barrier practice with Shea during the last two weeks, before settling towards the rear of the field.

Rawiller eased the mare widest of all approaching the turn for home and the $2.80 favourite did the rest, reeling in her rivals for a comfortable one length victory.

"She was quite powerful to the line," said Brad.

"She's a nice mare and she's going to win more races over a bit further."

My Gypsy Jane's Cranbourne victory was Shea's 27th for the season, making the 2016/17 season the most successful of his career to date - and with a month to run he's sure to add to that tally.

Currently inside the Top 30 trainers in Victoria, Shea will strive for further success in the fast approaching 2017/18 season.

"I really want to finish next season inside the top 20 trainers in the state," he said.

"And I know I have the horses and the staff to do it. My stable is very much on the up, we made a big splash this season and we'll strive to make headlines with plenty of good quality winners next season - I can't wait."