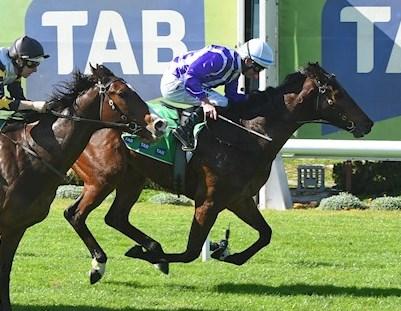 This week kicked off with a bang when RAIZA FLAME (3yo g, Statue Of Liberty x Mrs McVoom) won his second race in a row, leading all the way to romp home at Sale - now we turn to Cranbourne and Bendigo with a handful of strong chances.

Here are Shea's comments on our runners for the next two days.

LEICESTER ROCKET (2yo f, Stryker x My Summer Rose) was scheduled to run in a 2200m maiden but an error from Racing Victoria which excluded 2yo's from running in the race meant that we had to drop her back a week to this 1600m contest. That's not to say that the filly won't run well, she's a stayer of the future and if she can establish a break on her rivals she will be hard to catch. Follow her to 2000m next time!

MY GYPSY JANE (5yo m Teofilo x Manang) has had two good runs back from a break and is just about ready to hit winning form. This race will top her off beautifully for a 2000m contest but if she begins with the field she can win this. I've been doing a lot of work with her in the barriers to get her to jump with the field and she is responding well.

TO INFINITY (7yo g, Shinzig x Couverture) is the stable veteran but he's still capable of winning a race at this BM64 level especially on a rain affected track. He was solid first-up at Swan Hill and will appreciate a wet track if he gets it at Bendigo - don't underestimate him.

SPORTS WRITER (4yo m, Written Tycoon x Winning Team) is a talented mare that has the potential to reach city class but she's had a few niggles that have held her back a bit. She's been working well but will need a run or two off a seven month break - keep an eye on her though, she's very well bred and a valuable broodmare of the future.

Keep an eye on the stable news page in the next few days, we've got good runners coming up over the weekend.