Two in a row for Raiza Flame 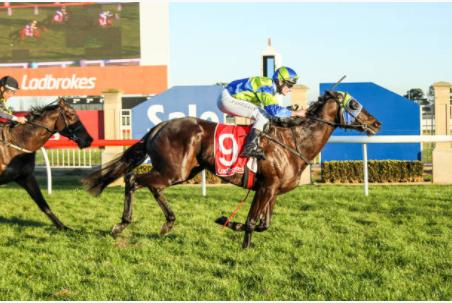 They were the words of race caller Adam Olszanski as RAIZA FLAME (3yo g Statue Of Liberty x Mrs McVoom) scorched clear of his rivals to win the Rivex Crane Hire BM64 Hcp at Sale on Sunday.

Shea has always had loads of time for this young horse but the horse gave him a few headaches early on as inexperience and immaturity stopped him from producing his best form on race day.

But the addition of blinkers before his Swan Hill maiden win has been a masterstroke, with Raiza Flame now a confirmed running machine, making a mess of his opposition in two brilliant all the way wins.

"He's a lot better than people give him credit for I can tell you that," said Shea.

"He's a fast horse and the penny is dropping with him now. He was brilliant today. He's up to winning in town on that effort for sure."

Jockey Brad Rawiller - who continues a fantastic 20% winning strike rate for our stable - was very complimentary of the horse and the performance, and can see him winning better races in the future.

"He begins so well, a track like Moonee Valley could really suit him, I could see him going very well there. Shea is such a great young trainer on the way up, I'm sure he'll find the right path for the horse."

The win takes Raiza Flame's earnings to over $40,000 from just six starts, and with the horse eligible for VOBIS Bonus races, there are more big pay days to come.

Congratulations to all the owners involved with the horse.