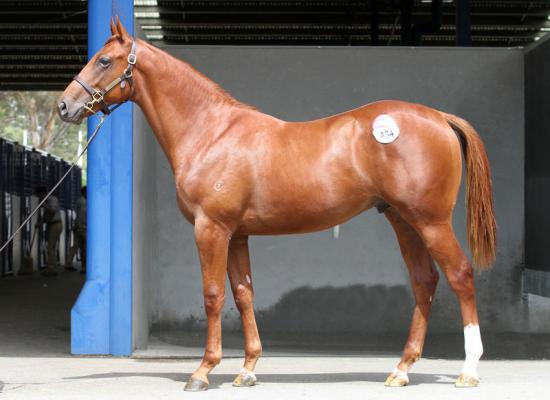 It seems like only yesterday that Shea was on the beat at the yearling sales around Australia and New Zealand, searching the catalogues and sales yards for prime candidates to join our stable.

With the assistance of former Champion trainer Peter Moody and G1 winning bloodstock agents Lenny Russo and Paul Willetts, we are very confident that our young guns are the best that Shea has ever bought.

The majority of our Class of 2017 are nearly finished their breaking in programs - here are Shea's thoughts on a few of the bright prospects so far.

Shea says "What a lovely colt this bloke is. From the first day of his breaking program he has been straightforward and professional, one of the reasons that Lenny Russo and I liked him at the sales was his intelligence and he's showing that in the stables - he just wants to work and is a very fast learner.

He's got all the hallmarks of a nice 2yo prospect and I'll give him every chance to head towards good races as a juvenile. He'll return to work in around 4 weeks and will be given every chance to be in the early 2yo trials if he shows me that he's ready."

Shea says "This boy is the most expensive yearling that I have ever bought and in 2017 was the most expensive progeny of his sire Magnus sold at public auction - that doesn't guarantee talent but on what I've seen at this early stage, the horse is a natural.

"He's a sweet mover with plenty of smarts and a better temperament than his older half-brother Cavalero which I also train and am aiming towards the 2017 Victoria Derby. His track riders love him and I couldn't be happier with the horse at this stage. Like the Magnus x Kusha colt, he'll be given the chance to contest those early 2yo trials."

Shea says "The Dalakhani filly comes from a family that I know very well, her dam Song Of Gold is a half-sister to my stable star Ocean Embers, a dual G3 winner and a mare that I will target at G1 races this spring.

The filly has been a dream to work with so far and she reminds me so much of Ocean Embers at a similar stage it's not funny, they are very similar and my track riders agree. She's a classy type and moves beautifully, she might be a valuable filly one day.

Apart from the Ocean Embers connection, the Dalakhani x Danehill line cross really appealed to me - the stallion has a near 12% stakes winners to runners ratio with that line and Song Of Gold is by Danzero, a son of Danehill. It is a seriously good combination that rarely misses the mark."

Shea says "When Peter Moody gives you the thumbs up on a daughter of Bel Esprit, you really take confidence from his recommendation and Peter could not have been stronger on this filly at the sales when we inspected her.

In his words, "she's an absolute princess, the face of an angel and the arse of a hooker" and he thought similar things of Black Caviar when he saw her at the yearling sales. Now I'm not comparing our filly to the great mare, but I'll take it as a positive sign!

The filly is a total class act, I haven't had many move as well as she does and given her intelligence she might run early."

For more information on any of these young horses, please contact us info@edenracing.com.au