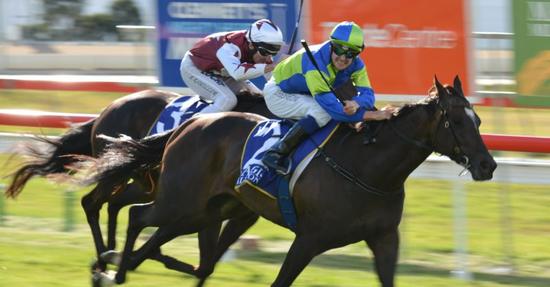 Ocean Embers once again has brought home a win for her owners taking out the Group 3 Bow Mistress Stakes in Hobart.

The following article has been reproduced with the permission of tasracing.com.au

THE connections of classy Victorian-owned and trained mare Ocean Embers have set their sights on a $1 million race in South Australia following her impressive victory in the Bow Mistress Stakes at Luxbet Park Hobart yesterday.

Ocean Embers came from near last turning for home to score an emphatic win in the $125,000 Group 3 event over 1200 metres.

The Shea Eden-trained mare was well away but from her wide gate rider Jason Benbow allowed the daughter of Beneteau to drift back to near last owing to a hot tempo set him locally owned and trained filly Trot On Candy.

The well-backed favourite Lyuba from the Darren Weir stable settled second and raced outside of the leader to the home turn while the previous Bow Mistress winner I Love It commenced a move from midfield to stake her claim.

When Brad Rawiller called on Lyuba to extend she slipped two lengths clear and was being hailed the winner halfway up the home straight but when Ocean Embers was called on for the supreme effort she sprinted quickly and went on to defeat Lyuba by a half-length with I Love It  almost two lengths away third.

“I am so thrilled with this mare because we have had so many issues to deal with and even up to two weeks ago it was touch and go whether we would make it to the race,” Eden said.

“But thanks to a lot of hard work from good people we have working at the stable we got her right and I have to make a special thanks to her rider Jason Benbow who does everything with this mare,” Eden said.