A GREAT YEAR FOR EDEN RACING 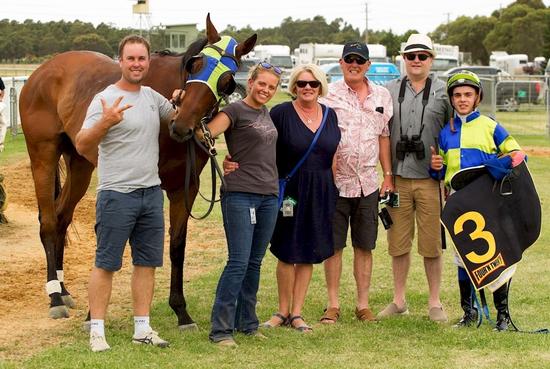 It’s been a great year for Shea Eden, and last Tuesday at Bairnsdale added to the success of the Eden Racing stable as three of its horses came home to give Shea a treble.

With the success of Ocean Embers in Shea’s first Black Type Win at Caulfield in October, the stable has celebrated success in the past week with wins at Kyneton by Sports Writer and the treble at Bairnsdale with Scotopia, Ansinna and Our Delinquent.

This brings the total winners and place getters to 65 for Shea in the past 12 months and sees him in the top 15 in the Trainer Premiership standings.

“This has been an exciting year for the Eden Racing Team” Shea said, “winning the three races today has just topped off the year.” Shea also gave credit to his dedicated team at Eden Racing for the success of the stable in the past year, and most importantly, he thanked the owners for their ongoing support and faith in him and the stable.

Shea is hoping for a great New Year’s Eve present when the stable’s champion Ocean Embers runs in a race at the Gold Coast to gain a wild card entry into the exclusive $1M Magic Millions race for Fillies and Mares over 1300mtrs on the 14th of January.

“This is an exciting opportunity for the owners and the stable to take Ocean Embers to the Gold Coast with such a prize in the offering. It was agreed that after her form in the Spring Carnival that the horse would next head to the Gold Coast and so her preparation has been aimed at this race” said Shea.

Shea has also just returned from New Zealand where he attended the 2 YO Ready To Run Sales with renowned and respected trainer Peter Moody. “Peter provided me with the insight into the horses’ breeding and I appreciated the wealth of knowledge that he gave to me”. Shea brought back three horses from the sale and would be happy to chat to anyone who may want more information on the horses and his plans for them.

We are also holding our annual Owner & Friends Woolamai Picnic Race Day on 2 January which should be a lot of fun and is open for anyone to join us.  Give Jenny a call 0427803385 or email info@edenracing.com.au

An exciting year and one that Shea and the Eden Racing Team hope will end in a celebration in the Gold Coast.