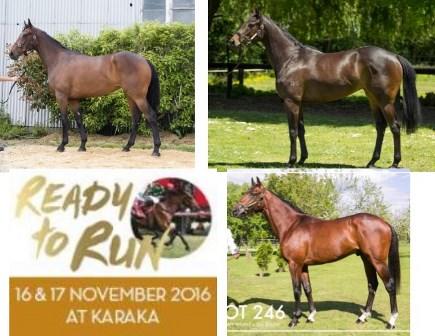 Shea has returned from the New Zealand sales with three quality horses. With the expert knowledge of Peter Moody, Shea was given the opportunity prior to the sales to inspect the horses, to meet the breeders and to research the pedigrees of those horses which he and Peter identified as Eden Racing possibilities prior to the sales.

The three horses he has brought back all have quality breeding and he believes are amongst the best horses he has ever brought to the stable.

This horse comes from Windsor Park Stud who have excellent credentials when it comes to breeding champion horses. This stud brought us the brilliance of Might and Power and So You Think – so the success has been in the breeding and we now have that same opportunity at Eden Racing with the addition of this young colt.

This young colt’s stallion is world champion miler Rip Van Winkle who was accorded the highest rated 3YO Turf Miler in the world by the World Thoroughbred Rankings committee in 2009.

Mare Go South has the breeding of Irish bred Stallion Golan who won the 2000 Guineas and King George VI and Queen Elizabeth Diamond Stakes in 2002. As a stallion he sired Group 1 Victorian Derby winner Kibbutz and has numerous other winners in both New Zealand and Ireland.

"This horse looks so relaxed and had such a fluid action that I was impressed with the colt right from the start". Shea

Tavistock (or Lord Tavistock as he was known in Australia),is a Champion New Zealand stallion who was ranked 5th on 2015/2016 New Zealand Stallion Premiership and Champion Hong Kong Sire the same year. His progeny include 5 year old gelding Werther named 2016 Hong Kong Horse of the Yea

"This very athletic filly appealed to both Peter and I, and we can see from the breeding she has all the makings of a great horse" Shea.

Blue Rata Jewel’s sire Savabeel continues the legacy of Champions Sir Tristram and Zabeel. This Champion sire has set the benchmark for all other Australasian sires with a stunning 6 G1 winners in season 2014-15, in 2015-16 3 G1 winners and in 2016 5 YO son Kawi has already won two G1 races this race season.

"The information we gained from both Peter’s knowledge and others at the sale was that this filly by Ocean Park should go really well, and the way she galloped in her ready to run video, this horse won’t take long to get to the track." Shea