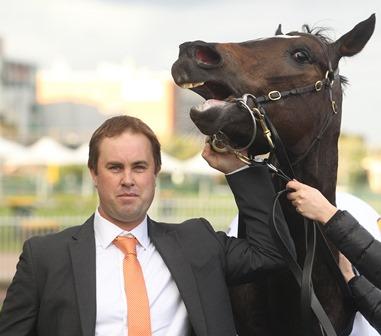 Shea was awarded the Special Achievement Award for the Most Winners 101-200 Professional Starters.

The brilliant win by Ocean Embers at Caulfield on Saturday was the 134th winner for Shea who won his first race in 2008. This sees Shea listed 34th in the Victorian Trainer’s Premiership standings for 2016/17, having finished ranked 35 last season.

With 53 horses under his care, his move to his Cranbourne stables has been a positive step in his training career. Located within walking distance of the Cranbourne Training Complex, Shea has all the facilities at hand necessary to ensure his horses have access to the best facilities.

Recent form by Scapa Cove, Better Strike, Ocean Embers and Stately Boy, have drawn interest in the young trainer who is looking forward to the Melbourne Spring Carnival this year.

Shea is looking for a successful lead up campaign by three year old Stately Boy who in his second run at Flemington in July dead heated for a third placing. Stately Boy, progeny of Champion Stallion Stryker progeny was purchased by Shea at the Inglis 2015 March Sales and has been under Shea’s care from day one. With the form that the horse has shown, Shea has his sights set on qualifying for the VRC Derby.

“This may be seen as a big ask for the young horse, but I truly believe that if he continues to race like he has and gain experience each run, he can make the grade for the Derby” Mr. Eden said.

The other horse that the stable is looking to for a run during the carnival is Ocean Embers who industry commentators are keeping an eye on, and who Shea has said is the best horse currently in the stable on form. “I’m looking to race the mare in the Cockram Stakes at Caulfield which is traditionally used as a lead up for the Spring Carnival.” Shea said. “She is a marvellous horse which had time off after an operation to assist with her breathing. It’s been a patient wait for her owners and I’m very thankful for their belief in the horse and the stable”.

In chatting about the recent successes for the stable, it was very clear that it is a team effort. “At the awards night I was a little nervous and so forgot to thank the most important people for the successes, and that is the Eden Racing Team” Shea said. “I am extremely proud of their commitment and dedication to the horses.”

If the past couple of months are anything to go by, the Eden Racing Team will have more to celebrate in the near future.