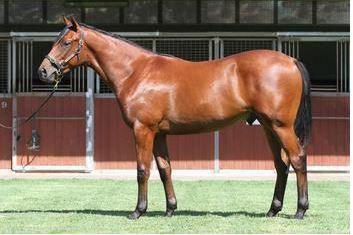 Shea and the team are proud to introduce to you this powerful colt by leading first season stallion STRYKER from the Group 1 performed mare ROYALE HARMONY.

PEDIGREE
This colt has been purpose bred to capitalise on the best qualities of sire and dam, he's an ideal mix of strength, athleticism, and scope, with plenty of quality through his predigree.

STRYKER is by the champion sire Fastnet Rock from the Woodman mare Laetitia, she is from the famous Denise's Joy damline, the same bloodline that has produced Group 1 winners More Joyous, Tuesday Joy, Joie Denise, Sunday Joy, Thorn Park, Bentley Biscuit, and Euphoria.

On the racetrack STRYKER was Group placed as a 2yo but trained on to realise his great potential as a 3yo when winning the Group 3 BTC Classic and Listed Heritage Stakes, placing twice at Group 1 level in the Golden Rose and against older sprinters in The Galaxy. He was a powerhouse sprinter and a ball of muscle as you can see below.

The dam of this colt ROYALE HARMONY was placed 4th and nosed out of 3rd in the 2007 Group 1 Crown Oaks, and was 4th beaten less than 2L in the 2007 Group 2 Wakeful Stakes. She was a winner and very consistent performer at Group level between 1600-2000m as a 3yo.

SALES NOTES
Shea made the following notes on the colt at the Inglis Melbourne Premier Sale in March this year...

"Best son of Stryker I have seen. Power, presence, and good scope to develop as a 3yo. Great mix of speed and strength in pedigree, super mile prospect!"

The colt was bred and reared at Three Bridges at Edington, just south of Bendigo. Shea is a big fan of the farm and the horses they grow and considers this colt to be one of the best he's seen off the property!

PROGRESS TO MAY 20
The colt is four weeks into his breaking in program and is proving to be one of most professional young horses. He picks up quickly when shown new skills and is a pleasure to work with, highly intelligent horse and a beautiful mover under saddle.

He will soon head to the paddock for 6-8 weeks before returning for another stable preparation. We'd expect the horse to race as a 2yo but probably not until after Christmas.

HOW TO GET INVOLVED