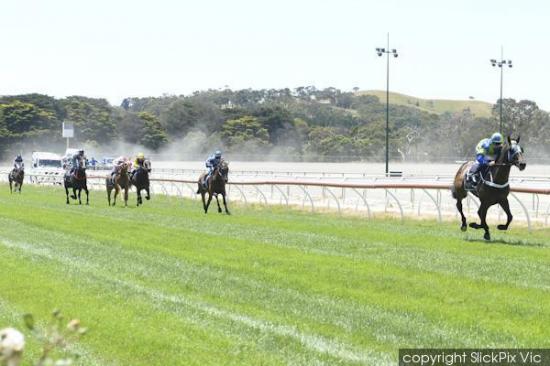 A group of very patient owners and a trainer that probably has a few less hairs on his head from previous races celebrated the stunning 8-length maiden win of DEL BOCA VISTA (5yo Artie Schiller x Wide Screen) at Kilmore on Sunday.

Del Boca Vista has given the term "slow maturer" new meaning during his career, winning his first race at start number 11 after making his debut two years ago.

"He used to have a melt down whenever we took him away from home, sweating, shaking, he was a big sook," said Shea.

"He's taken plenty of time to get used to his job and to fill out and mature, but he's a big strong horse now and is finally relaxed and happy at the races."

Taken to the front by young apprentice hoop Brandon Stockdale, Del Boca Vista loped along with ease before Stockdale asked him to increase stride by the 500m. The horse lengthened beautifully and cleared right out for a very soft 8-length win.

"I was stoked with Brandon's ride, he's still very inexperienced but he followed my instructions to the letter and got the result. He had a huge smile on his face after the race and so did the owners," Shea said.

"I've got no grand plans for the horse but I'm confident he has turned the corner now. Hopefully he can pick off a couple more races this prep as he steps up in grade."