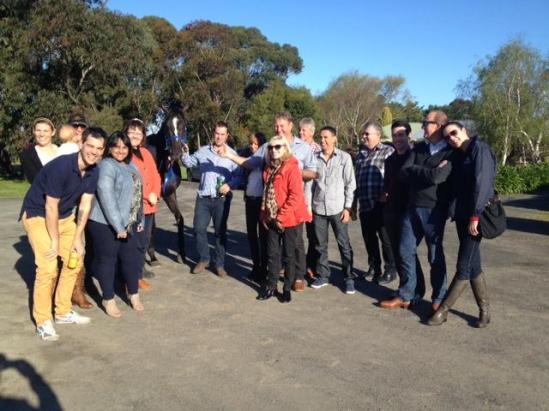 A group of loyal clients and now very excited owners had a great day in the Corinella sun on Sunday when they came face to face with our French import KINGWAY (4yo h Thewayyouare x Artistry).

After a fantastic lunch at local Italian winery La Provincia, the owners retired to Eden Racing headquarters to meet their new horse and judging by the smiles on their faces all were extremely pleased with the stunning colt.

"King Way has been in the stables now for nearly three weeks and he is settling in like a champion," Shea said.

"He's done a fantastic job to be so composed and settled after travelling from the other side of the world and spending basically the last 8-weeks in a paddock eating grass. It's an unfamiliar scenario for a European racehorse but he has handled himself beautifully."

After posing for a few photos with the owership group which had come from as far as Perth,Newcastle, and Mildura to visit their horse, King Way returned to his box, now known as "the King's Castle" where he was doted over for the rest of the afternoon.

"All of the staff are really excited to have a horse of his quality in work and we cannot wait to see what he can produce on the race track for us in the future," Shea said.

"I'll take him along slowly and if we get a couple of runs in before mid-December that will be great. Our main goal is to take the horse through his grades and hopefully have a Cups chance in 2015."