Stable Cashes in at Sale 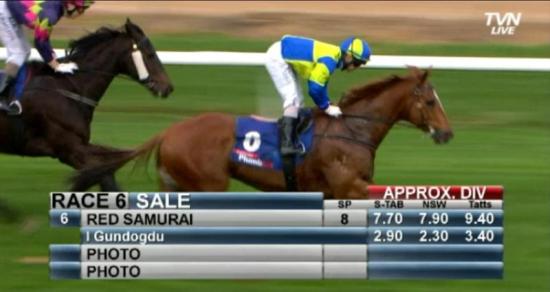 It was a another brilliant day for Shea Eden Racing and the team at Corinella on Thursday as Bianco Cruise and Red Samurai both scored impressive victories at Sale.

It was a red-letter day, with Bianco Cruise first breaking through for a much deserved maiden victory in the Eastcoast Plumbtec Maiden Plate over 1717m.

Beautifully ridden by Daniel Stackhouse, Bianco Cruise unleashed a powerful burst at the top of the straight to burst from the main pack with Leroy's Luck. The filly proved to strong in the end to hang on for a gutsy win.

No doubt looking for more ground, it was a superb performance in trying conditions for this talented filly, who is no doubt a horse to follow through her grades.

Just over an hour later it was a training double for Shea Eden, with Red Samurai making light work of his rivals in the Eastcoast Plumbtec 0-64 Handicap over 1200m.

It was again a telling ride from stable jockey, Ibrahim Gundogdu, who allowed Red Samurai to roll along on speed, before kicking well clear at the 300m to score comfortably by two lengths.

The slow conditions suited "Magic" down to the ground after a firm track at Mornington first up wreaked havoc with his action.

It was also a superb effort by stable favourite Flyingconi, who was gallant running second in a heat of the Winter Championship series, it wont be a long wait before we see big 'Duke" back in the winners stall.

Congratulations to all connections on a fantastic day for the stable, Shea is continues to do a marvellous job. This success is hopefully just the tip of the iceberg!