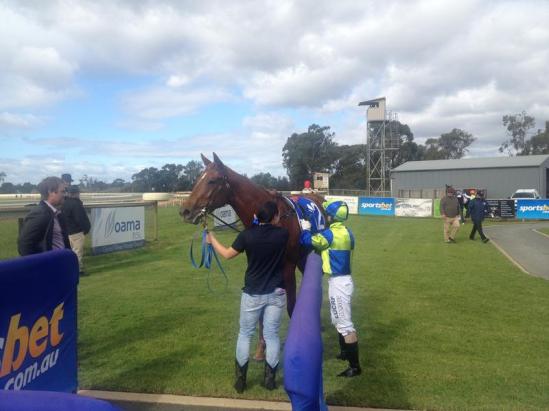 Two-year-old filly Novel Dancer left her opponents in her wake on debut Sunday at Echuca, as the promising type by Written Tycoon streeted her rivals to score an impressive six-length victory in the Echuca Toyota Plate (1109m).

With regular track rider Ibrahim Gundogdu in the saddle, Novel Dancer jumped evenly from barrier 1 and, once balanced, towed herself into the race to lead the field down the back of the course.

Comfortable with the way the filly was travelling despite receiving pressure on his outside from the Darren Weir-trained McKenna, Gundogdu slipped Novel Dancer more reign as the field rounded the bend.

It was a case of catch-me-if-you-can for the remainder of the race, as she continued to extend her lead right up until the winning post - eventually easing down to win by a stunning six lengths.

It was all smiles from Gundogdu as he lead our lovely filly back to scale and despite the ease of the win, he believes she still has plenty of improvement in the tank.

"She will be a really, really nice horse in six months time," Gundogdu said.

"She was still green, looking all over the shop in transit, but when i gave her a squeeze she extended in a great way.

"I think we will have plenty of fun with her thats for sure."

It was a fantastic result for the stable and we would like to congratulate all connections, thanks to Jess for such a fantastic job strapping on the day!

Its an exciting time for everyone involved with Shea Eden Racing and we look forward to more upcoming debutants over the coming months.