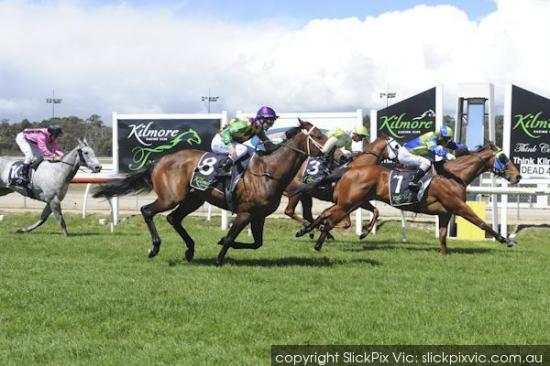 Another stunning weekend has come to a close for the team. Two winners on Sunday gave the team reason to celebrate.

Teretoa (7yo gelding, His Royal Highness x Nevada) was the first of the winners with a great run by the old boy over 1900m in race 4 at Kilmore.

Sitting just off the leader, jockey Ibrahim Gundogdu gave him a great ride by winding him up at the top the straight and giving the field something to chase. He crossed the line just under a length in front of the second placegetter, Matesy a Rock Of Gibraltar Gelding  trained by Peter Gelagotis.

Teretoa has had a nice preparation with some great runs, so it was no surprise to see him post one on the board. A big congratulations to Mr K Chuck, Mrs G Chuck, Mr S A Howard, Mr P Tisdale, Mr B H Needham.

Only a few hours later, Shea saddled up two horses in the last at Mornington over 1200m. To Infinity (4yo gelding, Shinzig x Couverture) who was first up this preparation and the last start winner Projects (6yo gelding, Show a Heart x Our Teacher’s Pet).

In a race with a fairly hot tempo, jockey Vlad Duric had Projects positioned just behind the leader and showed a great turn of foot when rounding the turn to pinch the lead and will by a half head.

A big congratulations to Mr K E O'brien, Mrs T O'brien who have just been wonderfully patient and are now reaping the rewards with two wins in a row.

Projects has been in work for some time now, and the money and time spent on getting him spot on to win two in a row has been well worth it and their patience has been wonderful.