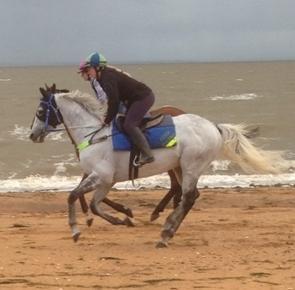 Shea is extremely excited to announce the arrival of the Italian Stallion to the stables, also known as ‘Voila Ici’, The 9yo Stallion by Daylami arrived at his Corinella stables last Friday and has settled in like the seasoned traveller he is.

Voila Ici was the highly publicised travelling companion to Black Caviar on her return from the UK in mid 2012. Having had a cups campaign with Peter Moody, it was time to change the lifestyle up for the often impulsive Stallion. Shea is tickled pink with the opportunity to train a multiple group 1 winner and is confident a sea change will suit the highly strung grey.

A (A)$82,000 yearling at the 2006 Italian SGA September Sale,  Voila Ici has since won 13 races in his hometown including two at Group 1 level and four at Group 3 level.  Upon arriving in Australia, he has raced 13 times with varying success. First up he ran a creditable 6th in the Memsie Stakes over 1400m, and followed that up with a 2nd in the 2012 Underwood Stakes behind Ocean Park.  More recently, he has run placing’s in the Eagle Farm and Caloundra Cups.

Shea is keen to get the ball rolling with him and is looking to return him to his best form. Keep your eyes for the ‘Italian Stallion’ to hit some features races this Spring!