A Swanny double for Team Eden 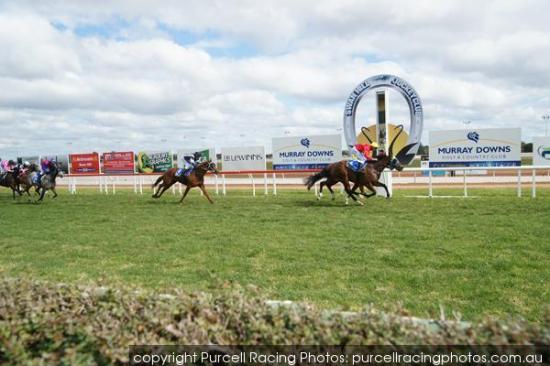 The trek from Corinella to Swan Hill is a long one at the best of times, even longer if you drive all that way and come home with nothing.

But the return trip flew by for Shea and the team who were all smiles after a winning double and a second placing from just four runners.

HOMETOWN GLORY (4yo mare, Churchill Downs x Lady Josephine) broke through for a win at just her second race start thanks to the urgings of leading hoop Brad Rawiller, who proved why he is one of the best riders in the state when lifting the mare to a maiden win over 1300m.

Rawiller coaxed the mare into a winning position on the turn and looked set for an easy win before losing his whip with 200m to run, leaving him with no choice but to ride hard hands and heels in a ding-dong battle to the line.

"Terrific result for the mare and for her owner and breeder Su-Ann Khaw who has been a great supporter of the stable. I'm really happy to be able to get a winner for her and her father," Shea said.

Rawiller was back in the saddle to steer CONDAHUSSLER (6yo gelding Hussonet x Con's Amy) to a second straight at a middle distance victory over 2100m.

A 3.5L winner at Geelong at his previous start, Condahussler was on speed and dominating yet again, surging to the post down the long Swan Hill straight to record a comfortable victory.

"He's found his winning form now and I think there might be a nice race in him around this distance range over the coming months. I'm so pleased for the owners as they've shown a lot of faith in the horse," Shea said.

Congratulations to the winning owners Con Bouronikas and Robert Mcgain.