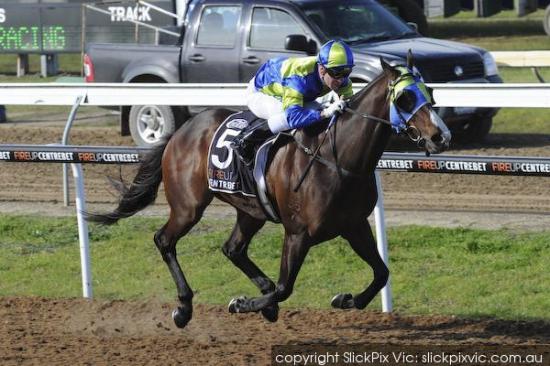 Punters were treated to a fine training display from Shea Eden at  Wednesday’s city meeting at Geelong , with the young trainer’s  Corinella team leaving the track with a win and two  close seconds from  just three runners on the day.

Condahussler proved to the stable that he  has plenty of racing left in him with  his fifth win from 30th starts, careering away from the field at the home turn after sitting just behind the leader and travelling comfortably throughout the race.

Shea, was especially pleased with the win which went some way to repaying the faith that the owners have shown in the horse after having a shaky start to his campaign.

“He hasn’t had much luck this horse and it’s just good to get a win for the owners and they deserve every bit of this.” Shea said after the race.

Vlad Duric rode the son of Hussonet and was very pleased with the way the horse was able to relax and travel through the race.

Vlad is building a great partnership with the stable, combining with Shea for some good results as of late.

This partnership will have every chance to continue to blossom on Sunday when Vlad will ride three Shea Eden horses at Seymour.

Dubai to Dublin was ridden by master jockey Glen Boss who partnered the horse to victory last start at Seymour and shows good confidence in his future.

The four-year-old son of Dubai Destination sat back off the pace, which probably wasn’t the ideal place for him, but then rounded the turn having to avoid a broken down horse and a hip and shoulder early in the straight..

Shea will look to push on with Dubai to Dublin with a number of options available over the coming weeks.

Chilly Reception was able to jump well and sit just behind the speed until the turn in the final race of the day. Vlad Duric was happy with the way he was travelling until Glen Boss pressured him round the turn,  causing Chilly to really charge into the race. Vlad elected to keep going with this momentum which unfortunately meant that he had to go earlier than what he would have liked.

Shea will now push ahead with Chilly Reception looking at some options in the next two weeks for the horse.

On the back of a  successful day for the stable, there is certainly a feeling in the air that Shea is at the beginning of a big Spring Carnival with runners Victoria wide, including a chance in the Group 3 Lister Quezette Stakes with Zellindi at Caulfield on Saturday.