Doubling up at Seymour 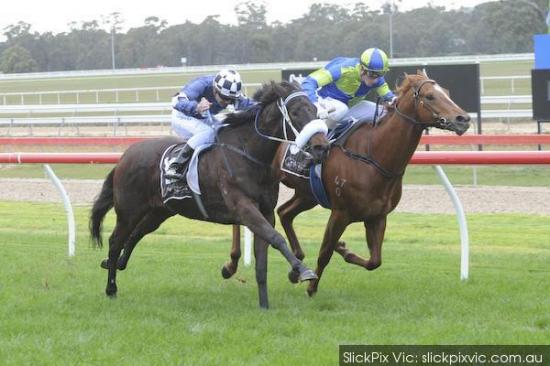 Shea took three horses to Seymour on Tuesday and returned with two winners as promising young horses RED SAMURAI and DUBAI TO DUBLIN broke their maiden status in impressive fashion.

RED SAMURAI (2yo colt Snitzel x Glamour Stock) showed tremendous determination despite racing greenly on debut in the opening event of the day over 1009m to deny Stakes placed Kona Breeze by a head with a 6L margin to third.

Click here to watch a replay of the win

The colt kicked off his career in the best possible style with Nathan Rose on board much to the joy of his connections.

After much research Shea picked the colt from the Magic Millions Ready To Run Sale on the Gold Coast late in 2012, and had been impressed with the horse's ability in jump outs at Cranbourne.

"He's such a natural competitor and thankfully he has the ability to compliment that," Shea said.

"It was a terrific win and I have no doubt that we will see the horse compete to a very good standard in town at his next few starts. I really like him and I can't wait to see what level he can get to."

DUBAI TO DUBLIN (3yo g Dubai Destination x Up State) was also very tough when winning race 4 on the program over 2015m for long-time stable supporter Brian Cash, with three-time Melbourne Cup winner Glen Boss in the saddle.

After racing fiercely on speed at Caulfield at his previous start, Boss was instructed to focus on settling the lightly raced stayer at Seymour and was able to do so with expert ease. After hitting the front and being challeneged strongly early in the straight, Dubai To Dublin responded to Boss' urgings to pull away for an easy win on the line.

Click here to watch a replay of the win

"The horse is showing me signs that he could get to city class in time but he's just doing a bit wrong at the moment," Shea said.

"He'll go for a break now as a winner and I'm sure that Brian will have a lot more to cheer about next preparation."