Shea's say - chipping away in May 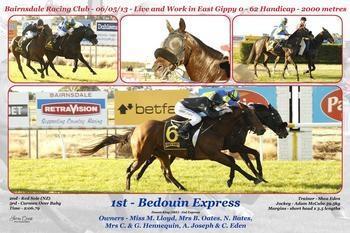 We took smart two year old filly ZELLINDI to Adelaide for the listed Dequetteville Stakes at the end of April and had to endure a marathon judges decision before discovering a pixel seperated her from the winner Calcutta on the line.

It was an incredibly brave effort from the filly which was having just her third start, and I am sure that she will return a bigger, stronger filly in the spring; her owners will have a lot of fun with her.

We headed back to Adelaide for the second time in a month with TO INFINITY and once again the horse was extremely unlucky in the listed Adelaide Guineas.

After travelling three and four wide throughout the race, To Infinity kicked strongly to hit the front in the straight, only to be overpowered late in the race by rivals that had had softer runs. I am certain that he has a decent race in him and if the owners are patient they will be celebrating again soon.

We put those near misses behind us though when BEDOUIN EXPRESS scored his second win for the stable with a triumph at Bairnsdale.

I was so pleased for the owners that this bloke has continued to hold a consistent level of form, and this was his seventh top three finish from 11 starts since joining the stable.

Here's hoping that the month of May provides more success and smiles than the near misses of recent weeks.