Shea's Say - To Infinity and beyond! 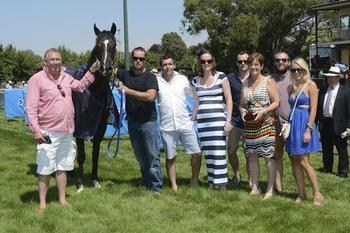 I love welcoming back a winner (any winner!) but I must admit that I was not really looking forward to the drive home from Kilmore races as much as I should have been after TO INFINITY won his first race on Sunday.

I should have been smiling from ear to ear after the handsome son of Shinzig gave his rivals a hiding in the Harry Overman Memorial Maiden over 1200m by near 4-Lengths, instead I was contemplating blocking my ears for the three hour trip...

To Infinity was one of three horses that we purchased at the Inglis Melbourne Premier Sale in 2011, my first year as a buyer at the sale, but while I can claim the title of "finder" of SPEEDY GRAPHITO and BEAU DASH, my partner Miranda was the spotter of To Infinity.

She spotted the horse at Shady Lane Thoroughbreds while we were inspecting another one, then bought him horse without asking me, going to $16,000 for the near black colt.

Thankfully, Miranda's years of experience with young horses helped her to identify a good one, and To Infinity looks destined for better races on the evidence of Sunday's win.

Brad Rawiller was full of praise for the horse who was having just his third start, and is confident that he can race on to city grade in time and over a little more distance.

It's worth noting that the three horses that I bought at the 2011 Melbourne Premier Sale have all won a race within their first three starts; Speedy Graphito (bought for $25k), Beau Dash ($20k), and now To Infinity ($16).

I'll be buying again at the Premier Sale next week and would love to welcome some more winning owners into my stable.

Until the next winner,