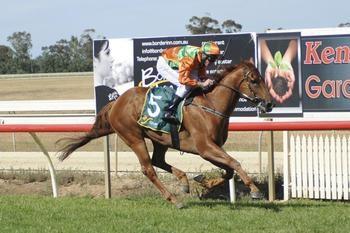 Projects continued his outstanding form since joining the Shea Eden stable with a brilliant win in the Moama RSL Handicap (1412m) at Echuca.

Eden took over the chestnut’s preparation in 2012 after Projects notched a single win in a fairly lacklustre career in Queensland but has improved rapidly once settling in Victoria.

Projects won at Echuca at his debut for Shea Eden Racing before recording a creditable third at Kyneton on Kyneton Cup day but improved again off that effort to return to winning form at Echuca.

Brad Rawiller rode the gelding at Kyneton before remaining with the son of Show A Heart for his latest assignment. Rawiller rode Projects positively to take an early lead from barrier eight.

Projects travelled comfortably during the middle stages of the $15,000 event despite having no peace with two horses challenging him for the lead but the five-year-old skipped clear on the home turn.

His 58.5kg handicap made no difference as Projects strode away from his opposition to score an impressive 3-1/2-length win to notch his third victory from 25 starts.

Projects took his earnings to more than $38,000 with his effort with $19,600 of that tally coming in just three starts for the Shea Eden stable.