Congratulations on your engagement. 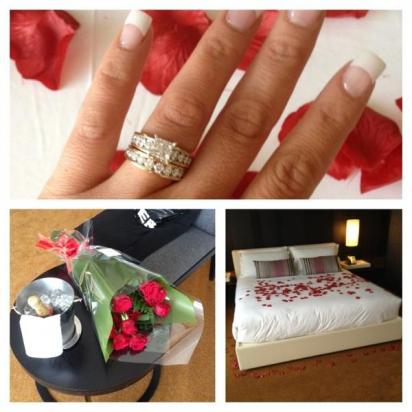 After being together for 7 years and 3 children later, Shea finally worked up the courage to propose to his long time partner Miranda on Melbourne Cup morning. The setting was well thought out, Shea had booked a room at the swish Crown Metropol Hotel and had organised for the room to be a romatic oasis. It certainly didn't disappoint, rose petals scattered over the bed, a bunch of beautiful red roses and champagne on ice. If this wasn't enough to guarantee a yes from Miranda the ring would get her over the line. Her ring is absolutely stunning and would put a smile on any girls face.

The story goes that Shea got down on one knee and asked Miranda to marry him and without a doubt in her mind she said yes.

Melbourne Cup Day is known for celebrations and both Shea and Miranda certainly had reason to celebrate.  After all of his thought and efforts put into his proposal Shea ended up being shorter odds of a positive outcome than Americain was going into the cup. The difference between the two was that Shea came out the winner.