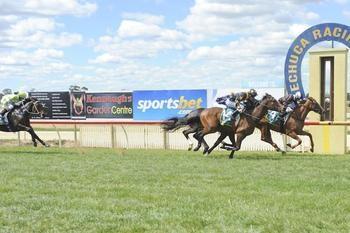 Lightly-raced four-year-old Mists Of Avalon showed she has a bright future as part of the Shea Eden team with her game maiden win at Echuca.

Mists Of Avalon arrived at the stable earlier in 2012 after stints with the Peter Moody and Brett Cavanough yards, during which the mare showed ability but was unable to break through for a win.

The daughter of Flying Spur gave an indication of returning to her best form with a solid first-up fifth on the Geelong Synthetic track before her victory in the Dempsey Galvin Timber Maiden Plate (1200m) at Echuca.

Experienced hoop Luke Currie took the reins on Mists Of Avalon in the $15,000 event. Currie was content to let Mists Of Avalon race where she was comfortable without bustling her early with the chestnut taking a position on the back of the leaders for the first 600 metres.

Currie said he had a few concerns rounding the home turn that he had asked Mists Of Avalon to improve too soon but the seven-start veteran did the job in good style.

“She travelled well and she was tough on the line,” Currie said.

“She’s pretty push-button and I thought at the top of the straight that I might have pushed the button a little bit early.

“She should be able to be that way over more ground.”

Mists Of Avalon is a daughter of Lake Susannah, who won the Listed Frank Underwood Cup over 1900 metres at Rosehill during her racing days.

Congratulations to her owners - Burnewang North Pastoral (Mgr: Ms C L Hains) – on Mists Of Avalon’s victory, which took her prizemoney to $14,900.

Click here to view a replay of Mists Of Avalon’s maiden win at Echuca.