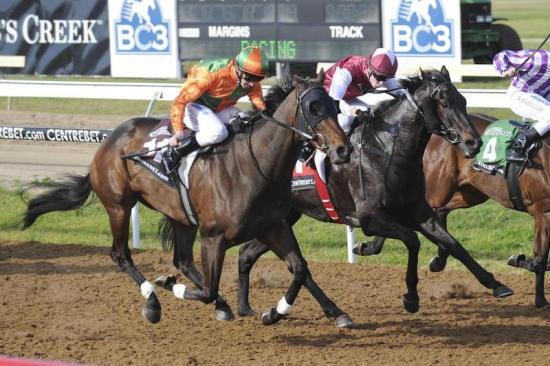 Five-year-old mare Novaspirit continued to show her appreciation of the Geelong Synthetic track when she powered home to post her second win at the venue.

Novaspirit’s appearance in the Mr Paparazzi 0-62 Handicap (1000m) was the Shea Eden-trained galloper’s third at the venue. The daughter of Bel Esprit won in Rating 62 grade before posting a good fourth in Rating 68 class at her next run.

The speed was on in earnest early in Novaspirit’s latest assignment, which allowed jockey Daniel Moor to find cover in the second half of the field from the potentially awkward barrier nine.

Novaspirit enjoyed the fast tempo but had plenty in hand when Moor pushed her into clear running rounding the home turn before sprinting quickly to defeat the Adelaide metropolitan winner Spatha.

Moor knew about Spatha’s talent because he rides him work at Anthony Freedman’s Mornington Peninsula property on a regular basis.

“I was going to be wide early so I had to try something else,” Moor said.

“Obviously, I wanted to be a touch closer but they really ran along but, given the chance to balance, she came with a really good turn of foot.

“He (Spatha) trialled enormous and weight has probably stopped him today but I had a good five or six-kilo(gram) weight pull on that horse today and that has shown.

“She was well placed and in great condition.”

The win was the Kevin and Tanith O’Brien-owned and bred mare’s third from 12 starts. Novaspirit has registered all of her wins since joining Shea Eden Racing a year ago.